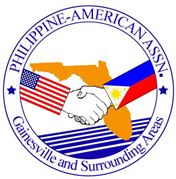 The University of Florida's Filipino Student Association (UFFSA) celebrated their Filipino-American History Month this past October. This annual event showcases the Filipino culture in hopes of enlightening the student body at UF and surrounding community. The students featured exhibits of the Filipino heritage through food, martial arts and different activities. Our Filipino students are such a close knit group that they recently adopted the tradition of showing respect to their elders. Younger students would refer their older mentors as "ate" for older women and "kuya" for older men. The elders also referred their younger students as "ading". It is inspiring to see the young generation carry on the torch, passing on the deep traditions of the Filipinos. The officers and members of PAGASA, Inc have proudly supported UFFSA throughout the years and will continue to do so in the future.

A dinner reception to welcome and honor the Philippine Ambassador to the USA, Honorable Jose L. Cuisia, Jr. was hosted by PAG-ASA on June 23, 2014 at the UF Hilton Conference Center. This was the first time that a Philippine ambassador visited Gainesville. Mr. Ambassador Cuisia was accompanied by Dr. Joy Javelosa, the agricultural attaché, and Dr. Ma. Rosini Alvero, the commercial attaché.

A sumptuous dinner with the traditional lechon was served after Dr. Manny Palada, an international horticulturist and Gainesville resident, delivered the invocation.

Ms. Ellie Palada, president of PAG-ASA, welcomed the Ambassador, his entourage, and representatives of the Filipino-American community of Gainesville and surrounding areas. The affair was attended by PAG-ASA members from the academe, business sector, medical field, retirees, and the studentry.

The Ambassador delivered an enlightening speech, highlighting the advances the Philippine government has achieved - socially, economically, and in its stature in the international scene. He also mentioned the following:

- GNP (Gross National Product) has increased in the last 5 years

- Improved peace and order situation in Mindanao is attracting more businesses to plan and invest in the area.

Ambassador Cuisia also informed the group that the Department of Foreign Affairs currently has a program that encourages young Filipino-Americans to visit the Philippines to have a better understanding of their cultural heritage.

The officers and directors of PAG-ASA were most impressed and felt privileged to have been given the opportunity to meet with the Philippine Ambassador. Our thanks to Dr. Ching Gomez who coordinated the Ambassador’s visit.